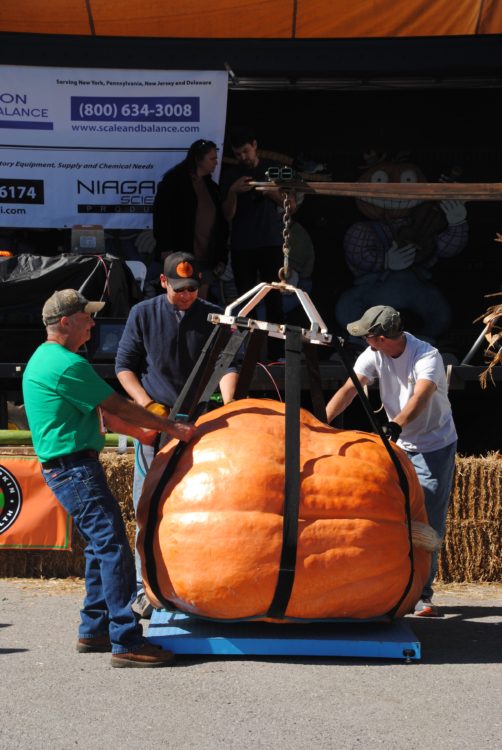 One of the Great Pumpkin Farm’s most popular events, the annual World Pumpkin Weigh-off, takes place this weekend as part of the Farm’s 24th annual Fall Festival.

Judging for The World Pumpkin Weigh-off begins at 12:00 p.m. on Saturday, October 5; winners will be announced and prizes awarded as soon as all the entries have been officially weighed. The owner of the heaviest pumpkin at the World Pumpkin Weigh-off will take home the top prize of $5,000, (with the chance to win twice that amount and earn a world record if their pumpkin weighs over 2,000 pounds!). Cash prizes will also be awarded for second through sixth places.

Last year’s winner was Karl Haist of Clarence Center, NY, whose pumpkin weighed in at 2,027 pounds – setting a New York State record and becoming the first 2,000 pound pumpkin in state history! The Great Pumpkin Farm also saw the first 1000 lb. pumpkin during its 1996 Fall Festival – 1,061 pounds – and it went right into the Guinness Book of World records!

Meet Your Favorite Superhero This Weekend!

It’s also Superheroes Weekend at the Fall Festival this Saturday and Sunday, in conjunction with WNY Superheroes and Cosplayers. In addition to taking your chances in the superhero-themed corn maze, you can meet, greet and have your photo taken with your favorite superhero from noon to 4:00 p.m. both days – FREE with your paid admission. Superheroes scheduled to appear include Catwoman; Superman; Belle; Rapunzel; the Penguin and Buffalo’s Wolverine. Plus there might be a few surprise superheroes…you never know!