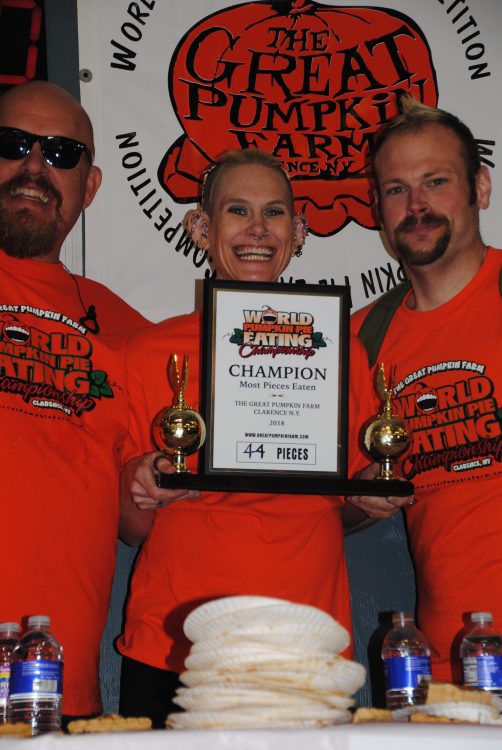 Professional Competitive Eater Molly Schuyler of California will be back in town this weekend to compete in the Great Pumpkin Farm’s Hands-free World Pumpkin Pie Eating Contest as part of the third weekend’s festivities at the Fall Festival. Last year, Schuyler consumed 44 pieces of pumpkin pie in 10 minutes to take first place honors (and the $1,000 prize); a tie for second place resulted in an “eat off,” which led to Dan Kennedy taking second honors.

This year marks the tenth annual competition and will include professional and non-professional eaters from across the country (and including several Western New Yorkers) and Canada, who will compete for a total of $1,800 in prize money. The Hands-free World Pumpkin Pie Eating Contest starts at 1:00 p.m. on Saturday, September 28 in the Entertainment Center at the Great Pumpkin Farm.

Also happening this weekend: animatronic dinosaurs Vinnie and Teddy will be wandering around the superhero-themed corn maze from noon to 4:00 p.m. Saturday and Sunday looking for prey and kids can win prizes by drawing their favorite funny face pumpkin during the Funny Face Drawing Contest Saturday and Sunday. Plus The Balloon Experts will be here from noon to 4:00 p.m. both days creating incredible balloon characters and designs and there will be bands playing at the Witches Brew.

It’s gonna be a squashplosion of pumpkins Friday night beginning at 5:00 p.m. as the Great Pumpkin Farm, in collaboration with 103.3 The Edge and the Shredd and Ragan Show and Skylighters, will explode pumpkins of all sizes during indePUMPKINSday. There will be live music at the Witches Brew Bar and food trucks, the Pumpkin Palace and Bakery will be open and guests can purchase pumpkins. There’s NO ADMISSION to this event, which includes fireworks after the squashplosion!

As with every weekend at this annual fall attraction tradition, there’s something for everyone, including amusement rides; hayrides; corn maze; the pumpkins and mum patch; pumpkin cannon; shooting gallery; homemade donuts, pies, cookies and pastries; Halloween decorations and special events, such as the World Pumpkin Pie Eating Contest, the Trebuchet Contest and so much more!